Grammar Rules? The 10 Most Embarrassing Mistakes To Avoid 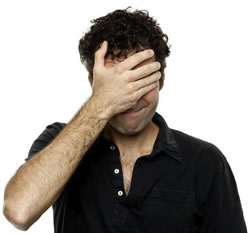 Why care about grammar? Some of the greatest works and catchiest phrases are awful grammar. Whoever wrote "here's looking at you, kid" would have failed English, and "I can has cheezburger" is utterly beyond hope. "Good bye and good luck!" and "Can I have a cheeseburger?" would be far better grammar, yet less effective. Unfortunately, just ignoring grammar rules will never make your writing as catchy as "Gone with the Wind" or an Internet meme. The reason those phrases work is because they were written by people who didn't break rules until they knew why those rules existed. If you write without knowing the rules, you come off as someone who's poorly educated and none too smart.

Grammar provides a common and widely understood structure for language. It's a set of rules that, if followed, produce text that any English speaker will understand and recognize as correct. Deviating from that structure without understanding what you're doing produces text that fewer people will understand. In other words, it makes your message more likely to get garbled in the process, and less likely to be received at all. That doesn't mean that grammatical structure is the best structure for every message, of course. It just means that it is the structure most likely to work.

Once you understand what grammatical structure looks like and why grammar rules apply, you can see where deviating from them will produce text that more effectively conveys the message you want. (Hint: "creative" phrasing usually works best when it's surrounded by proper English.) Unfortunately, a lot of people make grammatical mistakes that just get in the way of the message they want to send. These mistakes often reflect poorly on the person, too.

Many common grammatical mistakes are simple and subtle, but subtle doesn't mean they're OK. Subtle mistakes still register in the lower echelons of your readers' minds. The mistakes make them take a little longer to think about the meaning of what you wrote, and hurt your message. You want your message to come across as clearly as possible. Here are 10 common mistakes you should avoid.

1) Avoid putting commas in front of "that"

Starting sentences like this is not necessarily bad grammar, but it is a frequent sign of lazy and ineffective writing -- which is just as bad. Instead of writing the sentence, "there are better ways to shovel snow in winter, like a snowblower" the phrasing "a snowblower is a better way of shoveling snow" is simpler and more direct. A simple and direct phrasing may not be the tone you're going for, of course. Now that you know the rule and the reason it exists, you can break it when it suits the situation, or uphold it when following the rule is more effective.

3) Watch out for lists or bullet lists that aren't consistent.

A classic example is starting out with a list of errors that people make, and then midway through turning it into a list of things to do instead. Consider the following:
- Lots of people put commas before that
- Starting sentences with "there are" is lazy
- Make your bullet points consistent
See the problem? The last point was not consistent with the first two. All of a sudden it's "whoa, was this a list of don't-dos or to-dos?"
This confusion hurts comprehension.

This mistake is particularly common among people with not-so-great English. To someone who's familiar with the phrase, this mistake conveys precisely the wrong meaning. In essence, you're saying "do" when you mean "don't." It takes a second for them to figure out what you actually meant... and people taking a second to understand your writing is not really something you want.

"Lie down" is to recline, while "lay down" is to put something down. Things get confusing when you start talking about the past. For example, "I lay in bed this morning, staring at the ceiling."
"Effect" and "affect" are even hairier. Consider the following examples:
"That poem has a strong effect on people"
"That poem really affected my view of the world"
As a rule of thumb, affect is often a verb, while effect is often a noun.
There are exceptions, of course: "The program effected rapid change" and "that guy has a flat affect, wanna bet he's a killer?"

"Which" is very general. It's flexible, and a little ambiguous. You can use it to introduce elements of a sentence that aren't critical. "The trick to good writing is a lot of reading, which takes time."
"That," on the other hand, is restrictive and definite. When you use "that," it carries weight. "A lot of reading is something that takes time." If the subject of the sentence you're writing is a person, use "who" instead. "John is a person who writes well because he reads a lot." This one is subtle. A lot of people would make the mistake of using "...person that writes..." instead. Even if the mistake is common, it's still a speed bump in your writing.

You might "bring something to the discussion," but you wouldn't "take something to the discussion." On the other hand, we "take out the trash" but don't "bring it out." The difference is direction. We "bring the trash back in." Bringing is moving something towards you. Taking is moving it away. "Chinese take out" is, after all, when you move food out of the restaurant. (That doesn't mean you should call it "Chinese bring in" once it shows up on your doorstep.)

10) Watch out for misplaced and wrongly used apostrophes.

First of all, if a word ends in s, you never tack on a second s. If you mean multiple dogs, the word "dogs" keeps the s on the end, otherwise you'd mean one dog. "The dogs houses were small but comfortable," though, isn't quite right. You need a single apostrophe to show possession. The thing is, "the dog's houses were" is still wrong. It would be right if there was only one house for one dog, but written like that it's just one dog having multiple dogs' houses. That's the solution, by the way: "the dogs' houses were small but comfortable."

For more common grammar mistakes, have a look at our infographic here.