Does Grammar Still Matter in 2013? 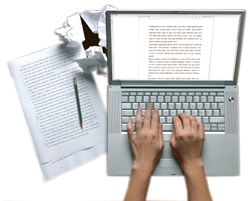 The title should be corrected to read, "don't grammar matter none no more in 2013." No need to use your shift key to capitalize, or put a question mark. That key is such a bother. Verb-subject agreement can now go straight out the window, and double, even triple, negatives abound.

The age of the social media is the age of informal communication. Twitting, emailing, blogging and texting over the last decade has made it increasingly plain that people of the 21st century, particularly the young, rarely bother with grammar. For sure, students who flunk their grammar classes are rejoicing. It no longer matters how syntactically correct a message is. The concept of right and wrong grammar has given way to the exigencies of the times when people hardly find it practical to compose a letter with flawless syntax, spelling and punctuation. It's now all about sending a message as fast and efficiently as you can. Drop the periods and commas, drop the subject-verb agreement, or the tenses. No need to spell right. Even Yoda speaks better English.

The burden of understanding a sloppily constructed message falls on the recipient of the message. Fortunately, people at the other end understand the abbreviated messages mired in grammar gaffes since they are just as guilty. Bothering with the rules of writing is a pointless encumbrance. It's enough to think about the message when there are so many other more interesting things to think about, such as how soon Android will release the next upgraded OS.

Grammar has become rare in the workplace

The sloppily composed messages are not solely in the domain of online posters and cellphone texters. They have become just as ubiquitous in the more formal corporate workplaces. A Wall Street Journal article that appeared last June 20, 2012 bemoaned the trend, citing executives who still remember what they learned in English class to admonish erring employees who seem to represent a new generation that see nothing wrong with exhibiting a level of illiteracy that makes grammarians cringe.

But the lackadaisical disposition towards the King's English is not entirely spawned by the workforce. Company leadership have as much complacency in allowing the progressive slide to ungrammatical communication to become the norm in inter-office correspondence as well as those that reach customers, suppliers and business partners.

This WSJ article mentioned the Seattle-based software developer, RescueTime, whose management has never enforced grammar rules on its staff. Employees are mostly in their 30s and no less than the 38-year old VP of product marketing, Jason Grimes, stated in unequivocal terms that sincerity and clarity are the hallmarks of communication unfettered by rules. It appears that years of software coding where abbreviated expressions in anarchic English is the rule has taken over his better judgement on proper communication. He declared that the ones who will succeed are "those who can be sincere, and still text and Twitter and communicate on Facebook."

This sentiment clearly points to continuum from real world office space, cellphones to cyberspace characterized by the ease with which messages are worded unshackled from the confines of grammar rules. After all, nobody really likes rules. It would seem that communication has acquired the same attitudinal irreverence and contempt that the post-modern artists have. Traditional compulsory rules of artistic engagement are readily broken in establishing a borderless creative space that considers just about every expression that is sincere as a work of art.

Some grammar rules are unclear

Grammar has had its contentious rules with some violated here and there to become an idiomatic norm over time. Take for instance the grammatically incorrect but widely accepted expression "Any questions?" Any is singular, as in anyone, anybody, anything, any person, etc. But after listening to a lecture, the phrase is something the audience routinely expects.

In addition, words that have been traditionally regarded as nouns like "impact" and "architect" have crossed into the domain of verbs as people commonly use "impacted" and "architected" in the jargon of information technology which been quite busy coining new expressions in the English lexicon. Indeed, language is a major artifact of a dynamically evolving culture.

But the evolving dimension of language that often sees a few traditional grammar rules flouted with impunity does not give license to anyone to abandon the rules that have defined what it means to be literate in the language. The evolution of language is not about losing rules. It makes no sense to murder the king's English for the sake of convenience to get the message in what Mr Grimes consider as clear and sincere. Grammar has never been about clarity or sincerity. Those traits are simply attributes of writing style. Even the most grammatically correct statements can be ambiguous and hypocritical. In the save vein, sloppily constructed messages are not always sincere or clear.

Not everyone is guilty

Losing the concepts behind what it means to be literate may be symptomatic of a larger social phenomena where social and moral values have been eroding over the decades, but not if the more rational members of society have their way. There are still executives such as Bryan A. Garner, president of a Dallas-based staff training and consulting firm who screen job applicants with spelling and grammar tests while requiring his staff to have at least two other employees edit emails and letters sent to parties outside the company.

This US News article has recently sparked a growing debate on the issue of whether or not grammar still matters. A recent AOL survey showed that 68% of email users find spelling, grammar and punctuation errors to be annoying. That means that most Americans can still recognize what is grammatically correct. It would be interesting for such surveys to be made every year to see if the situation is improving or not. Perhaps it's about time for concerned grammarians to get the 68% grow in number.

At the rate grammar lapses have become the norm rather than the exceptions, it won't be surprising when archaeologists in the year 3050 excavates an American civilization around the early 21st century to discover a different form of communication. They will analyze and categorize the language find as an artifact of an evolved English variant - something akin to a Darwinian evolution in reverse - from men to apes.

Do you want to make a difference? Do you want to help change the world? If so, please proofread your copies and check your texts before you publish!