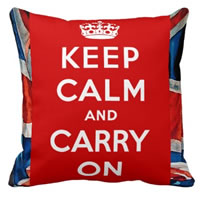 Ah, the British! Our friends across the pond that love nothing more than spending their days using alternative word combinations rather than saying exactly what they mean. Oh, and drinking tea and dressing up in their best clothes for dinner each evening…Okay, perhaps I've been watching too much Downton Abbey.

Anyway, once again it’s time to baffle your friends and family with 22 (more) “oh so very British” idioms.

1. All mouth and no trousers

Someone who boasts about doing something but never delivers on their word is ‘all mouth and no trousers’. Alternatively, you might say he hasn't got the balls! I will let your imagination work that one out.

2. As the actress said to the bishop

When a sexual reference is dropped into a conversation, ether accidently or deliberately, a person may follow it up with this idiom. The wording is often changed slightly to ‘as an actress said to a bishop’.

This idiom describes a person who has expensive tastes but a low salary. Historically beer has been considered a cheap alcoholic drink, largely consumed by low salary workers. Champagne, on the other hand, is generally associated with the upper echelons of society.

4. That was a banana skin

The banana skin idiom describes a situation that causes embarrassment or problems. This idiom is derived from the old slippery banana skin on the floor joke, with the implication being that a personal has slipped up.

A person who looks physically hurt or worn out has been in the wars. Should your son come back from football, all muddy with a bruised leg, you might say, “You've been in the wars, haven’t you”.

6. Getting it in the neck

Like getting stick (see part 1), getting it in the neck is to be criticised or scolded for your actions. A man who is late home from the pub is likely to ‘get it in the neck’ from his wife.

A joke or comment that ‘goes down like a lead balloon’ has been badly perceived, or has failed to impact the audience in the way it was intended.

8. Life isn't all beer and skittles

Drinking beer and playing skittles is fun, right? Well it is for the British, anyway. But, unfortunately, life can’t be one big party (another idiom). Shame.

9. A Fair crack of the whip

If someone has had a fair crack of the whip, they have been given equal/fair opportunity to accomplish something

This idiom describes a cautious person who treads carefully though life. “He’s all belt and braces that boy”.

If you box clever you are doing what it takes to win, even if it means bending the rules a little.

This idiom means to do something for the first time. A similar version is used in the very British sport of Cricket; to ‘go for a duck’ means to be bowled out for a score of zero.

13. Come up smelling of roses

A person who has come up smelling of roses has emerged from a situation with their reputation in tact, even though their actions may have suggested they would be in considerable trouble.

A person getting out of their pram responds aggressively to another in a situation that doesn't ultimately concern them. The recipient of the aggression is surprised, as they would be at a naughty baby climbing out of a pram.

Not considered entirely politically correct in the modern era, this idiom refers to gossip that is distorted or exaggerated as it is passed from one person to another.

A person who looks like death warmed up looks very sick. This idiom is common in the winter months when people are suffering colds yet still struggling on with work and daily tasks.

If someone is enthusiastic about taking on a task or new challenge, they are considered to be ‘keen as mustard’.

No one wants to buy a dead horse, and to try and flog one is to do so without any hope of succeeding. This idiom is used when a person is trying to raise an issue without any subsequent interest or support.

‘The full Monty refers to something being complete; undiluted or reduced in any way.

Something that has gone pear-shaped has gone wrong, or produced unexpected and generally unwanted results.

When British people swear in conversation, ether accidently or intentionally to highlight the seriousness of an issue, they often say, “pardon my French”.

When it’s impossible to decide between two options, the choice is as broad as it is long, which basically means the options are of equal size.

If you haven’t read part one you can do that here, and if you love these “oh so very British” idioms show some love by sharing this with your friends.