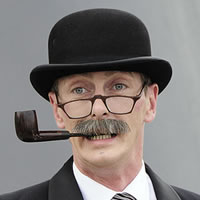 An idiom is an expression or saying that means something other than its literal translation, and the British English language has hundreds, possibly thousands to get your head around. Learning British idioms will not only improve your creative writing skills, but also increase your everyday conversational skills. Here are 21 idioms you’ll find British English people using on a regular basis.

This idiom doesn't literally refer to y-fronts, but instead to your personal life. British people have a reputation for being quite prudish and secretive when it comes to their personal relationships, and so in past times it was considered uncouth to talk about or expose one’s personal life outside the confines of your home. An example of washing your dirty linen in public would be arguing about an extra-marital affair with your husband in front of the neighbors.

To tread on thin ice is to swim In deep water, which is another idiom, by the way. Both mean to put yourself in unnecessary danger, to walk a pathway likely to present you with problems or trouble in the near future.

3. To tiptoe on broken glass

Do you know someone who is extremely sensitive, someone who is likely to become angry at the slightest misplaced comment? Well, when you are around this person you must ‘tiptoe on broken glass’ to make sure you don’t say the wrong thing.

In the opinion of the accuser, a person who is a “waste of space” is taking up too much room on the earth. They are a waste of time and energy, and generally not worth bothering about. The implication here is that the space the person takes up would be better used for something else.

5. Getting on his/her high horse

A person saddling up in this way is considered to be taking a moral stand in an authoritative, arrogant and often aggressive manner. This idiom is usually reserved for someone who regularly acts this way; “Oh my, here we go. He’s getting on his high horse again.”

6. Making a mountain out of a molehill

This idiom is used for a person who makes something out of nothing. For example, a person who unnecessarily makes a small problem into a big one is making a mountain out of a molehill.

7. Putting the cat among the pigeons

Putting a cat among some pigeons is likely to cause commotion and worry for the poor birds, and therefore this idiom is used when an action causes a stir, shock, worry or anger among a group of people. “Wow, he really put the cat among the pigeons when he revealed to the team that he was leaving for a new club at the end of the season.”

8. It’s neither here nor there

Something that is ‘neither here nor there’ lacks relevance to a particular circumstance. It contributes nothing of substance to a situation or conversation.

9. Thinking outside the box

Walk into any office management meeting and you’re likely to hear this idiom at some point. It means to open the mind and go beyond the constraints of conventional thinking.

To be over the hill is to be too old for a specific purpose. For example, one might refer to a late thirties footballer as ‘over the hill.’

To chew the fat with someone is to engage in conversation. This idiom can refer to both general gossip and philosophical debate.

If you are engaging in an activity that isn’t taking you any closer to your goal then you are ‘chasing your tail’. A person who is chasing their tail isn't getting very far and would be better off changing tactics.

14. Throwing your weight around

A person who is throwing their weight around is being a bully. Now, this doesn't have to be in the physical sense, and is usually reserved for a person considered to be abusing their authority. “The CEO was really throwing his weight around in that meeting.”

15. Punching above you weight

If you take on a task that is perceived to be beyond your capability then you are ‘punching above your weight.’

If you plant tomato seeds then tomato plants will grow, and therefore you reap what you sow. This expression is applied to an action that has resulted in a negative consequence. If you choose to drink and drive you are sowing the seed of an accident, and should it come to fruition, you will have reaped that which you have sown.

British people use this idiom to announce their departure for a short period of time. ‘Popping’ refers to a brief trip, usually not for more than an hour.

If something is a piece of cake it’s easy to do. It’s as simple as that.

If a person is going spare they are very angry, and acting a little crazy, too. If your girlfriend catches you kissing another girl and starts throwing your stuff out the window, you might say. “Help! She is going spare.”

When something is notably cheap, the British will often say, “it’s cheap as chips”. This is a fairly working class idiom, and is not used in all sectors of society.

21. To give someone stick

To give a person stick is to openly criticize then in front of other. “The manager was giving him stick in front of the team today.”

A classic British idiom, ‘Bob’s your uncle’ usually follows a set of simple instructions to indicate that a task is easy and will be successful. “So you just turn this, pull that and Bob’s your uncle!”

Do you have typos, weak words, or tricky grammar errors in your writing? Find out:

Tip: Bookmark that page. (You will need it later.)
Popular Infographics

147 Words to Use Instead of "Very" (Infographic)