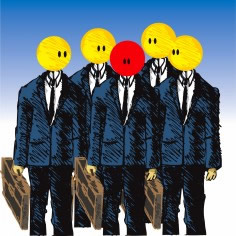 English is difficult, there’s no doubt about it. Yet just as you think you’ve mastered the difficult concepts of English grammar and punctuation, nasty little errors trip you up and make you look weak on paper. These errors become blindly obvious when pointed out by a smug friend or tutor - leaving you to walk away with your tail between your legs, thinking, how the hell did I miss that!

So, here’s a reminder of 12 nasty little punctuation and grammar errors that are always hiding around the next corner, waiting to spoil your hard work and make your writing look limp and feeble.

This is perhaps the most common apostrophe mistake in the world, particularly for those new to writing English.

The dog had lost its collar in the park.

It’sis a short form of it is or has:

Remember that without the apostrophe its implies that something belongs to someone/thing. It’s is simply a contraction (shortened version) for it is.

Another classic schoolboy error is the confusion of these two similar sounding words.

Who’s is a contraction of who is or who has:

I have no idea who’s going to clean up all this mess.

Whose is the possessive form of who, as in ‘belonging to whom’:

Whose cat is this, anyway?

This leads us swiftly on to two more confusing words in the same category. Who and whom are often used interchangeably, purely on the basis that writers don’t know which one to use and end up taking a shot in the dark.

Who should be used as the subject of the verb:

Any participants who find themselves feeling feint should report to the medical room immediately.

Whom should be used as the object of the verb:

Anthony had, once, been a close friend whom I trusted with all my heart.

This is an easy mistake to make, and one that often goes by unnoticed. Nevertheless, those with a solid command of the English written word will quickly spot this error in your work.

Use fewer with a plural or higher number than one (countable nouns):

There were fewer shades of pink.

Use less when referring to the singular (uncountable nouns):

If the bill is passed the parliament will have less power.

This is an easy one to remember, but writers still make this mistake all the time.

Remember that both can only be used with two items.

He is both sincere and loving.

But you wouldn’t write,

He is both sincere, loving and happy.

A punctuation and grammar error rolled into one, this is one that gives grammar teachers sleepless nights, and makes article readers spit their coffee across the room.

Your is to indicate possession:

You’re is a contraction for you are:

You’re going to the ballet tonight, aren’t you?

Far too many writers use these two darlings interchangeably, when in fact there is a distinct difference that drastically alters the context of a sentence.

May implies a possibility whereas might implies more certainty.

You may score three goals on Saturday

You might get a parking fine if you park in the wrong space.

Can you see the difference? I am far more likely to get a fine parking by parking in an illegal space than I am to score three goals on Saturday for my team.

Since is not the same as because, and the two cannot be used interchangeably. Since refers to time, and because refers to causation.

Since getting this job I’ve been working long hours because of a heavy workload.

Can you see the difference? Since refers to when I started the job (time), and because sets up the cause of the long works hours, which in this case is a heavy workload.

Over the years the word anxious seems to have morphed into a substitute for being excited, but using it in this way will make your writing look rather confused.

Anxious is to be somewhat frightened and fearful. Ask any person who suffers from anxiety and they’ll tell you they certainly don’t feel excited when they are having an anxiety attack.

I am anxious to see my dog on the weekend. (Wrong)

I am excited to see my dog on the weekend. (Correct)

Unless, of course, you have a vicious dog that frightens you.

I am anxious about going into the haunted house next door. (Correct)

This post wouldn’t be complete without this classic. Not a minute goes past without someone somewhere making this mistake.

The true effects of LSD on the brain are unknown.

The affect on my health after taking LSD has been rather negative.

This is another one of those tricky ones that writers tend to avoid because they simply don’t know which is suitable. Most end up sticking with further rightacross the board rather than making an appropriate distinction between the two.

If the distance is measurable, or referred to as such, use farther:

I kicked the football twenty yards farther today than I did yesterday.

If the distance or subject matter is immeasurable then use further:

The flooding will cause further problems in the south.

That’s right. Contrary to popular belief these two words aren’t one of the same, and no, you can’t substitute one for the other. To be envious (envy) is to long to have what someone else has; their riches or luck. To be jealous (jealousy) is fear of rivalry.

I envy his good fortune.

It makes me so jealous when my wife smiles at the milkman.

Can you see the difference? A good way to remember the difference is to think of jealousy in terms of sexual circumstances; one man lusting after another man’s wife, or a woman jealous of her ex-boyfriend’s new girlfriend.

So there you have it. Twelve essential punctuation and grammar tips to hardwire in your memory bank and avoid looking weak on paper.